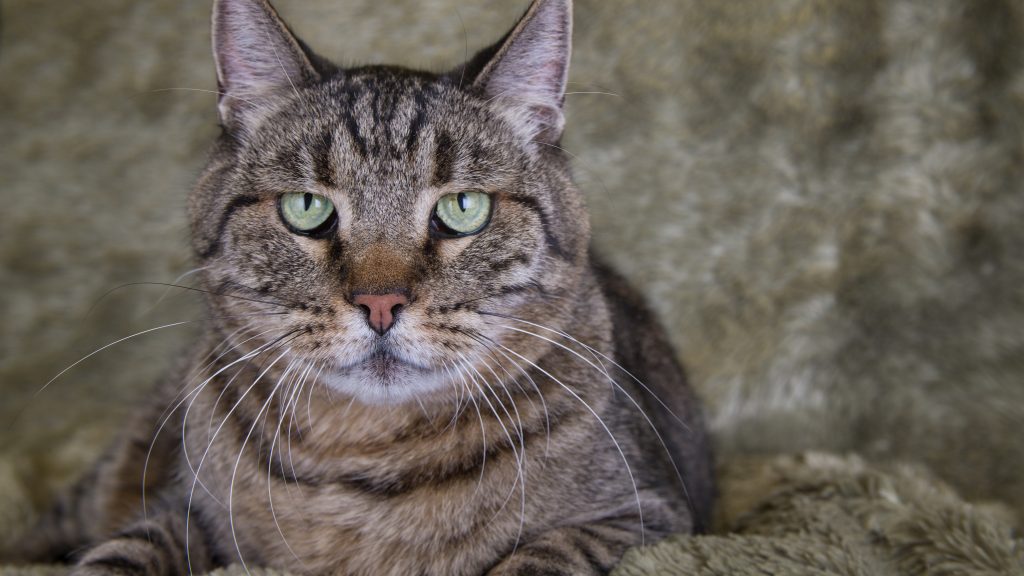 Clients frequently have the following 2 questions when considering radioiodine therapy for their cat's hyperthyroidism.

1.) What are the risks to my cat, because he/she was treated with radioactive iodine for its hyperthyroidism.

2.) What are the risks to me or other individuals who share space with my cat following its treatment with radioactive iodine for its hyperthyroidism.

The risks associated with low level ingestion of radioactive iodine relate to an increased risk of developing thyroid cancer. When the dose of radiation to the thyroid is very low, like might occur by accidental ingestion of litter box contents, then mutations leading to cancer can ensue. Interestingly, when higher doses are given, like those received by the patient treated for hyperthyroidism or thyroid cancer, then the injury to the cells is terminal and hence the cells do not survive to go on to become malignant.

When it comes to survival, the studies that have been done show that cats cured of their thyroid disease by radioactive iodine live much longer (up to twice as long) when compared to hyperthyroid cats treated by methimazole. So in this case the targeted radiation exposure is actually increasing survival for these patients. Having said that, the clients who own the cats we treat with radioiodine should make every effort to avoid ingesting any contents from the litter box. The good news is that virtually every client will already take steps to avoid this, even when radioactive iodine in their cat's urine is not the motivation.

Risks from hyperthyroidism.
The chronic elevation of circulating thyroid hormone levels in cats with hyperthyroidism leads to changes in their heart muscle that predispose them to developing heart failure. Hyperthyroid cats are also at risk for complications related to the hypertension that frequently accompanies hyperthyroidism. These complications include cerebrovascular events (i.e., strokes) and the premature exacerbation of pre-existing kidney disease. Luckily these risks will diminish in time following successful radioiodine therapy and a return to a persistently normal thyroid level.

Risks from other illness.
Another significant risk for hyperthyroid cats is not actually related to their thyroid disease. Once the correct dose of radioiodine has been determined and administered, most of the time the tumors responsible for causing the elevated thyroid levels resolve and the cats are cured. Amazingly despite over 35 years of veterinary experience treating hyperthyroid cats with radioiodine there are virtually no reported side effects. The overwhelming majority of cats (>95%) are cured by a single therapy with only a small percentage of cats requiring additional radioiodine therapy (4%) or becoming persistently hypothyroid (1%). Occasionally cats will act like they may have a sore throat for a couple of days after the radioiodine therapy. But this generally resolves without intervention. It is also common for some cats to hide under the bed for a day or so after returning home as they de-stress following their “out of home” experience. Cats may also continue to show signs of hyperthyroidism, including vomiting and diarrhea, for 3-4 weeks after the radioiodine therapy as the disease continues to resolve.

The risk to these cats is the simple fact that many cats in the age range when cats develop hyperthyroidism (8+ years) also develop other diseases. The other conditions that cats can develop at this age are numerous and varied. Many times the only symptoms these other conditions cause are weight loss. Despite the extensive blood and urine tests, chest x-rays and physical exams that we require before radioiodine therapy, some of these conditions remain undiagnosed at the time of radioiodine therapy. Ultimately of course, these conditions can be diagnosed. However once the diagnosis of hyperthyroidism has been made, and no other illnesses are identified, the motivation to perform further diagnostics, especially those that require the need for anesthetics or are invasive may be lost. What this means is that occasionally we invest clients’ economic and perhaps more importantly, emotional resources in treating and resolving hyperthyroidism is cats with other, currently unknown diseases. Unfortunately these cats may continue to deteriorate and may even die from their other non-thyroid diseases.

The total effective dose equivalent to individual members of the public from the licensed operation does not exceed 1 mSv in a year, exclusive of the dose contributions from background radiation, from any administration the individual has received, from exposure to individuals administered radioactive material.

Note that the reference above excluding licensee's from considering "exposure to individuals administered radioactive material" in their compliance with the NRC regulartions does not apply to animals. The word "individuals" in this context means "people".

This means that our radioactive materials license requires our practice ensure that our clients receive less than 1 mSv of radiation exposure as the result of our treatment of their hyperthyroid cat with radioiodine. The AVMI radioactive materials license utilizes release criteria and precautionary instructions specifically based on the evaluation of the relative exposure levels to clients following radioiodine therapy for hyperthyroid cats treated with I-131. Therefore if you adhere to the release instructions we provide you with (copies provided on admission and again at discharge), you should be assured of getting less than 1 mSv exposure from interacting with your cat.

Now the question is what risk does one obtain from receiving an exposure of 1 mSv?
First we need to put this exposure level into some context:

How do x-rays increase your risk for cancer?
When x-rays, or any ionizing radiation, pass through the body they cause electrons to be ejected from atoms, leaving behind positive ions. These positive ions, or free radicals, can cause damage to DNA. DNA can also be damaged directly by radiation. If DNA is damaged, there are three possible outcomes:
The cell dies (only occurs with very high doses).
The cell repairs itself perfectly (most common result).
The cell repairs itself with mistakes (rare).

The inaccurate repair of DNA is rare, but can cause a cell to act wildly or grow into a cancer. Oftentimes it takes decades for cancer to be detected following radiation exposure.

Why isn't there a study directly linking medical imaging and cancer?
There are no studies that directly link cancer to the low dose radiation used in current medical imaging. To scientifically prove a connection would require nearly one million patients followed closely over decades to detect the small increased risk with any confidence. The estimates of risk currently used are extrapolated from patients that have received much higher doses (e.g., atomic bomb survivors) using the linear, no-threshold model of radiation exposure risk.

Why is the average risk of developing cancer so high?
Regardless of radiation exposure, the average overall lifetime risk of developing an invasive cancer is 37.5% for women and 44.9% for men. These statistics are averages and do not predict what is going to happen to you. They do not take into consideration individual risk factors including lifestyle (smoking, diet, exercise, etc.), family history (genetics) or radiation exposure. The majority of cancers occur later in life and the average lifetime risk of dying from cancer is 25%.

How does the risk from medical radiation compare to background radiation exposure?
Natural background radiation exposure accounts for an average of 3.1 mSv/yr with variations depending on where you live. In the US, the average person is exposed to an additional 3.0 mSv/yr from medical sources (predominantly CT scans). Of course, some people receive no radiation and others much, much more. The average US total radiation exposure (all sources) is 6.2 mSv/yr which is an increase from 20 years ago (3.6 mSv/year) when CT scans were much less common. For comparison, the dose for a standard Chest CT is 7 mSv. A standard Chest x-ray is 0.1 mSv. There are fundamental differences between a continuous dose over a year (background radiation) and a dose that occurs over a few seconds like in CT, but these are helpful comparisons.

How does airline travel expose me to radiation?
A seven hour airplane trip exposes passengers to 0.02 mSv of radiation, which is a fraction of the exposure of a standard Chest x-ray (0.1 mSv). Domestic airline pilots are exposed to an additional 2.2 mSv per year, about the same dose as a brain CT.

As you can see from the table below, the estimated risk of developing cancer from exposure to 0.1 Gy (= 100mSv), while it varies with the age of the individual, is something less than 1% for adults. If we use the linear no-threshold model we could estimate that the exposure to 1 mSv would therefore have a risk of less than 0.01% (or 1/100th of 1 %) of causing cancer over the remaining life of an adult. Remember that the NRC regulations require that release criteria and discharge instructions provided to owners of hyperthyroid cats prevent exposures of more than 1 mSv. Hence people who's hyperthyroid cats are treated with radioiodine would be expected to have a potentially increased risk of developing cancer over the remainder of their lifetime as the result of that exposure of no more than 1/100th of 1 percent.

Because the risk from exposure to radiation in children is generally considered greater than the risk from the same exposure in adults [7], radiation precautions for children and pregnant women are more restrictive than for adults.The release instructions advising clients of hyperthyroid cats being discharged following radioiodine therapy at AVMI advise that pregnant women and children (defined as individuals less than 18 years of age) avoid contact (defined as a proximity of less than 6 feet) with the patient for a period of 12 days following discharge. At the time of discharge, exposure levels measured at 6 feet from the patient are virtually indistinguishable from background levels. Hence additional separation between the patient and children are unnecessary.

While the concept of radiation hormesis would suggest a potential benefit from exposure to low levels of ionizing radiation by stimulating the immune system's ability to repair DNA, any potential benefit is poorly defined and hence the current recommendations surrounding radiation exposure follow the As Low As Reasonably Achievable (ALARA) concept. The ALARA recommendation follows the classic "less is more" argument and hence adherence to this philosophy suggests that exposures to ionizing radiation should be minimized whenever possible.

8. Calabrese E.J., Hormesis: From Marginalization to Mainstream: A Case for Hormesis as the Default Dose-Response Model in Risk Assessment. Toxicology and Applied Pharmacology, 2004. 197(2): p. 125-136.